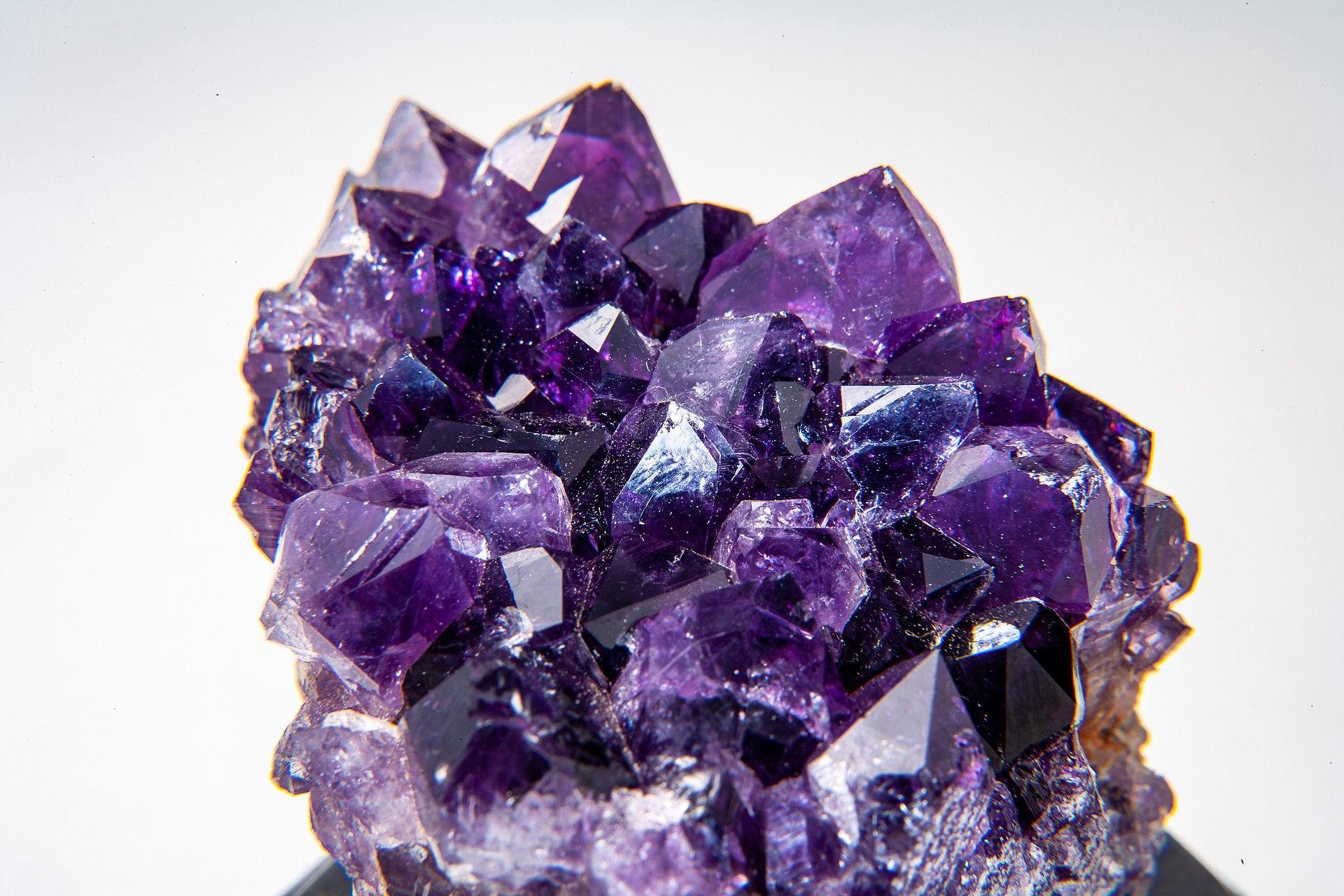 Amethyst (pronounced AM-eh-thihst) is one of the most common--and popular!--gemstone materials. This variety of quartz ranges in color from deep purple to pale lavender depending on the presence of manganese and iron.
The origin of this gemstone, according to the ancient Greeks, was the nymph named Amethystos. She refused the attentions of Dionysus, the god of wine and intoxication. As he pursued her, she prayed for protection and to preserve her chastity. The virgin goddess Artemis answered her call for help, transforming the nymph into a white or clear stone. The story ends with Dionysus pouring his wine over the stone--either accidentally or deliberately--dyeing the crystal purple.
With purple dye being the royal choice in the ancient Mediterranean, the amethyst quickly became associated with wealth and power. It traditionally adorned the robes and crowns of rich and powerful monarchs, being viewed as equal in value to ruby, emerald and sapphire. Amethyst still holds a place in the halls of power, being worn by church officials in the Church of Scotland, the Anglican/Episcopal hierarchies and the Roman Catholic church.
The British Crown Jewels include a number of pieces with amethyst, including the Royal Sceptre with the Cross, the Kent Demi-Parure and numerous brooches worn by Queen Elizabeth II and other female members of the family. Other royal families have amethyst-studded tiaras and parures in their own collections.
Amethyst is the birthstone for February.
Amethyst Metaphysical Properties
Because of the myth of its origins, this stone has been believed to prevent drunkenness and have the power to quell a range of other physical appetites and indulgences. This sobering effect is also believed to clarify mental acuity, improving the decision-making ability of those who wear it. This made it a popular choice for giving to young men--helping them avoid temptation and keeping them clear-minded when using weapons.
Leonardo Da Vinci once wrote that amethyst holds the power to dissipate evil thoughts and quicken one's intelligence. Healers have been using amethyst to increase their psychic abilities and intuition for centuries. Cross-culturally, this popular gemstone was used as a symbol of peace and unification. It is also thought to evoke feelings of serenity and calmness in those who wear it.
Amethyst is often used during meditation to provide an overall sense of spiritual balance. Some naturopaths will use amethyst to help treat insomnia and sugar imbalances, and to relieve headaches.
Amethyst Geological Properties
Amethyst is a naturally-occurring macrocrystalline (meaning large crystal formations) variety of quartz that usually grows on the inside of agate geodes. Geodes containing amethyst crystals are formed when clay, silt, sand or gravel are deposited and compacted by running water. While the crystals themselves may grow to be several inches, the geodes containing the amethyst crystals often reach several feet in height. Some of the largest amethyst geodes have been found in Brazil. Other locations where amethyst is mined include Sri Lanka, India, Uruguay, Madagascar, Germany, Australia, Mexico, Africa, Russia and the United States.
This majestic gemstone gets its color from the presence of manganese and/or iron. Amethyst can also appear reddish-purple or yellow-purple depending on the combination of minerals present in the clear quartz. Were amethyst less abundant, it would be even more highly-prized--and expensive!
Until Next Time...
Andrea